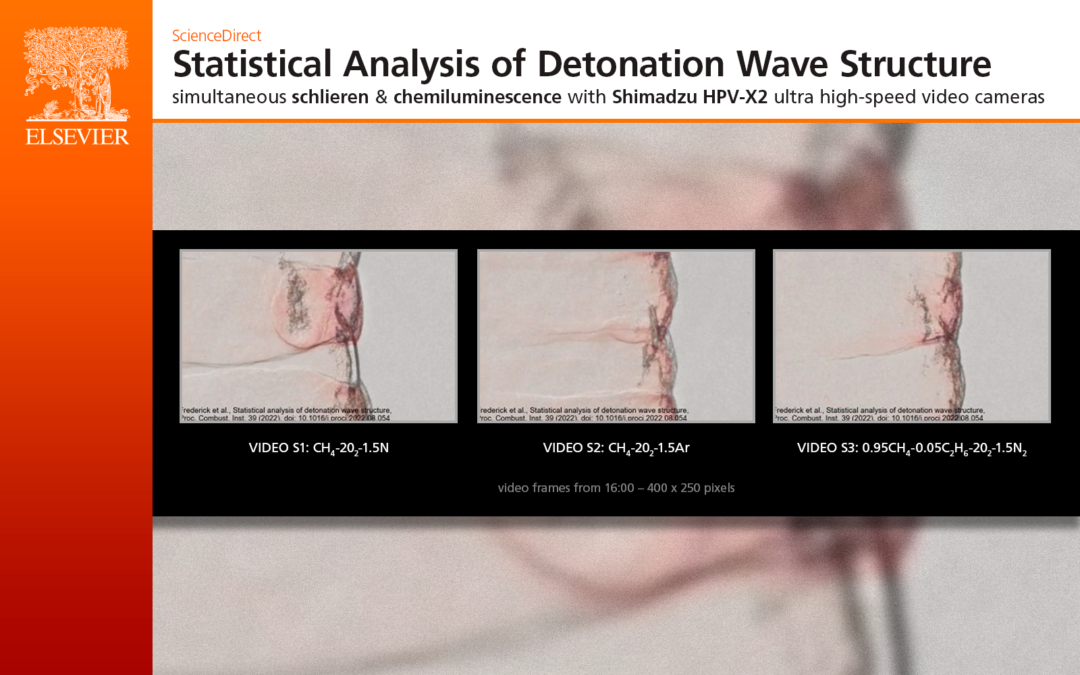 Featured in Proceedings of the Combustion Institute
Volume 38, Issue 4

This is an excerpt of a preprint that has been accepted for publication in the Proceedings of the Combustion Institute. Published version available at https://doi.org/10.1016/j.proci.2022.08.054

Hydrocarbon fueled detonations are imaged in a narrow channel with simultaneous schlieren and broadband chemiluminescence at 5 MHz. Mixtures of stoichiometric methane and oxygen are diluted with various levels of nitrogen and argon to alter the detonation stability. Ethane is added in controlled amounts to methane, oxygen, nitrogen mixtures to simulate the effects of high-order hydrocarbons present in natural gas. Sixteen unique mixtures are characterized by performing statistical analysis on data extracted from the images. The leading shock front of the schlieren images is detected and the normal velocity is calculated at all points along the front. Probability distribution functions of the lead shock speed are generated for all cases and the moments of distribution are computed. A strong correlation is found between mixture instability parameters and the variance and skewness of the probability distribution; mixtures with greater instability have larger skewness and variance. This suggests a quantitative alternative to soot foil analysis for experimentally characterizing the extent of detonation instability. The schlieren and chemiluminescence images are used to define an effective chemical length scale as the distance between the shock front and maximum intensity location along the chemiluminescence front. Joint probability distribution functions of shock speed and chemical length scale enable statistical characterization of coupling between the leading shock and following reaction zone. For more stable, argon dilute mixtures, it is found that the joint distributions follow the trend of the quasi-steady reaction zone. For unstable, nitrogen diluted mixtures, the distribution only follows the quasi-steady solution during high-speed portions of the front. The addition of ethane is shown to have a stabilizing effect on the detonation, consistent with computed instability parameters.

Simultaneous schlieren and broadband chemiluminescence imaging measurements were performed at a rate of 5 MHz. Broadband chemiluminescence was selected to image the reaction field because it enabled images to be captured without the use of an image intensifier, which would limit the dynamic range of the measurement. It also allowed enough light to be captured during the 110 ns exposure time to yield a suitable signal-to-noise ratio. The imaging region was located 3.1 m from the point of initiation and imaged through two 170 mm quartz windows using two Shimadzu HPV-X2 cameras. The schlieren system consists of a pulsed LED source, two f/10 parabolic mirrors, a bandpass filter centered around the LED emission spectra (Semrock FF01-640/20 BrightLine), a circular schlieren cutoff, and a custom camera lens. The camera used for broadband chemiluminescence imaging was outside of the schlieren beam path, angled at 9˚ to have a coincident field of view with the schlieren camera. Spatial calibration was performed using DaVis 8.4.0 to correct for the perspective introduced by the angled camera and to precisely overlay the schlieren and chemiluminescence images. The Shimadzu HPV-X2 detectors have a sensor size of 400 x 250 pixels. In this configuration, the field of view was 108 x 68 mm, yielding a spatial resolution of 3.7 pixels/mm.

The above videos are open data under the CC BY license doi: http://creativecommons.org/licenses/by/4.0/

Contact a Hadland Imaging representative to learn more and visit our page on the Shimadzu Hyper Vision HPV-X2 ultra high-speed video & everything you need to get the job done right.