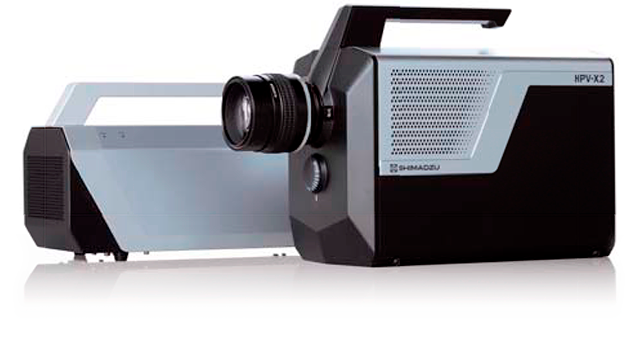 The HPV-X2 features a proprietary high-speed, high-sensitivity FTCMOS2 Advanced Next-Generation Burst Image Sensor, rated at ISO 16000 and captures 128 or 256 consecutive images at 1,000 to 10 million fps. The HPV-X2 connects to a PC laptop via Ethernet and supports various recording parameters combining numerous trigger and recording modes, including synchronization of multiple cameras for 3D DIC (digital image correlation). It truly is, the best in its class.

A Driving Force Behind Science & Technology

Science and engineering have made dramatic progress thanks to visualization technology. Examples of visualization technology include the invention of microscopes, capable of enlarged observations of phenomena occurring in the microscopic domain, X-ray inspection systems, which enable the observation of images utilizing light at imperceptible wavelengths, and infrared cameras capable of recording thermal radiation (light wavelengths up to 14,000 nanometers), all invisible to the human eye,

Our eyes are incapable of capturing phenomena occurring at times shorter than 50 to 100 microseconds. As a result, high-speed video cameras are necessary in order to record phenomena occurring at intervals that cannot be seen with the human eye. The video can be replayed at a slower rate to visualize the high-speed phenomena. The Shimadzu Hyper Vision HPV-X2 ultra high-speed video camera is the industry standard tool for visualizing ultra high-speed domains in a variety of fields, such as academics, aerospace, automotive, electronics, government, industrial, materials testing, military, medical, scientific. sports, technology, and others.

Image storage memory is located outside the image sensor on typical high-speed video cameras. The number of signal output taps are extremely small compared to the number of pixels. Video signal transfer from pixels to memory is a sequential, serial process and ultra high-speed recording of more than 1 million frames per second can’t be achieved.

Shimadzu’s FTCMOS2 Advanced Next-Generation Burst Image Sensor’s light sensitivity is rated at ISO 16000 – six times greater than the FTCMOS sensor, thanks to the adoption of our incredible new CMOS process. 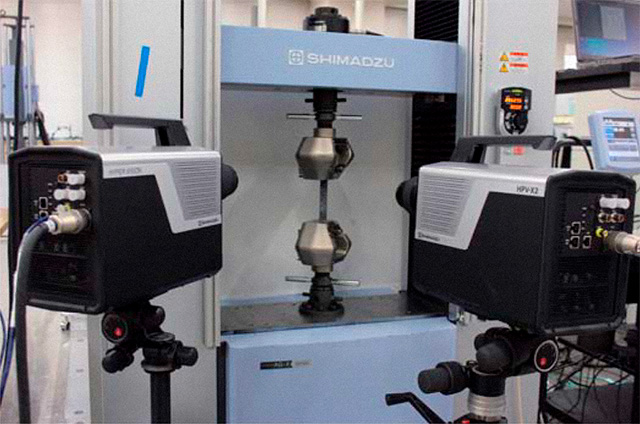 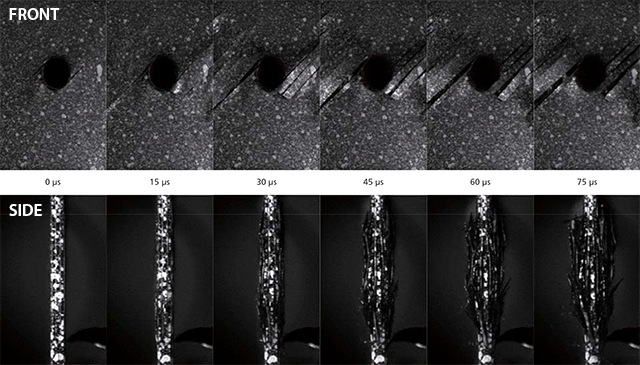 Front and side view image results from the CFRP breakage test. 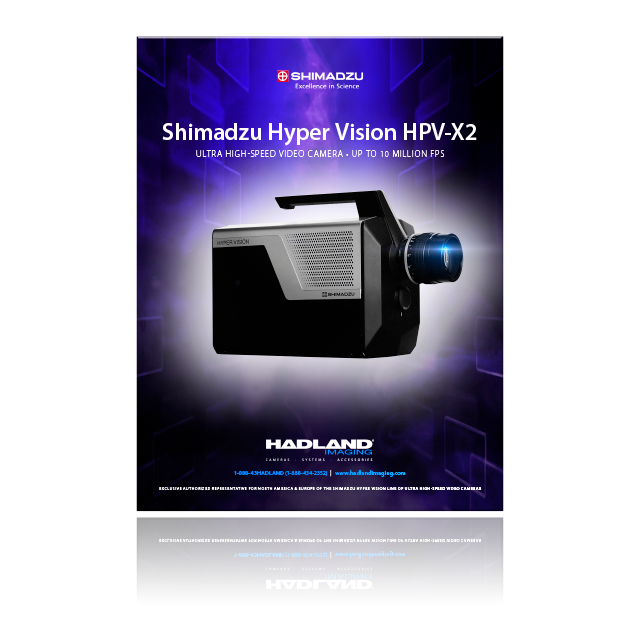 Specifications current as of  October 2021 and are subject to change.

[1) The recording speed is a reference value. It is not guaranteed to be an accurate value for the time interval between recording frames.

[3] 10-bit refers to the data format. It does not indicate a guarantee of data precision.

[4] Exposure times are rough indications and are not guaranteed as exact exposure time ratios for all recording speeds.

I want my Shimadzu HPV-X2!