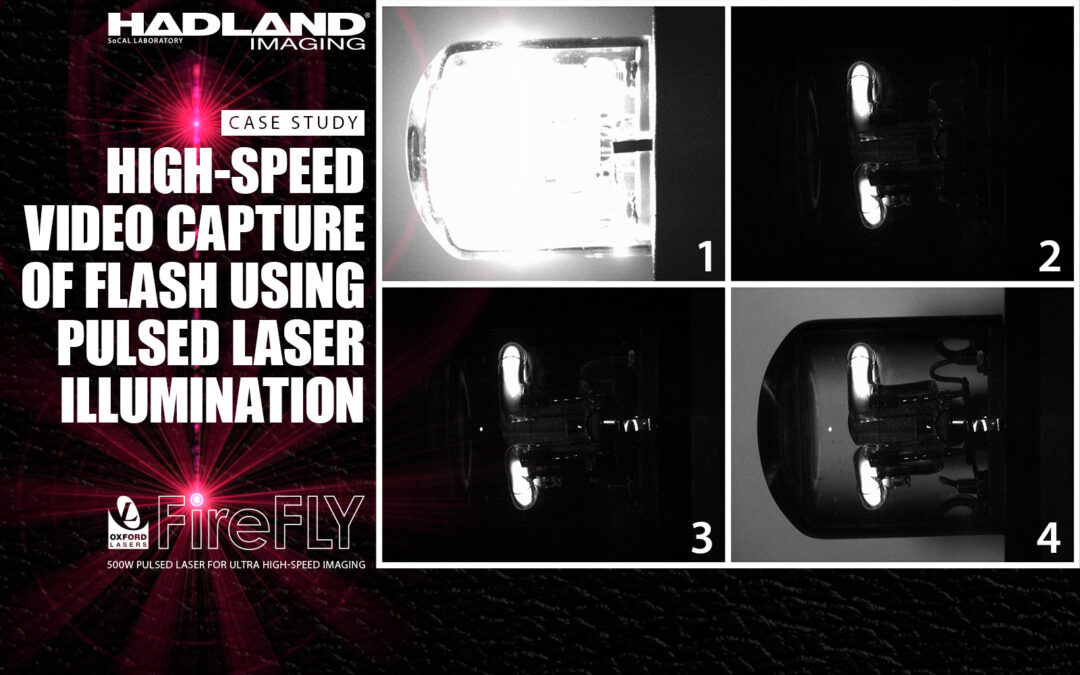 Bright flashes of light produced by explosions and sparks present special challenges in high-speed videography due to the flash overexposing the video. Correct exposure for the flash may be achieved by reducing shutter time, stopping down the lens aperture, and by employing filters over the lens. While the exposure may be correct for the flash, other subjects in the frame may be underexposed or too dark for satisfactory analysis.

Typically, the experimentalist who records high-speed video is interested in the dynamics that cause the flash and its consequences, such as the mechanism that triggers a spark or the debris created by the explosion. External illumination is clearly part of the solution for optimum exposure, but flashes are often much brighter than the light provided by most illumination sources, especially within a small field of view during an extremely short event. A promising strategy is to employ pulsed, monochromatic, directional light sources such lasers that take advantage of filters and synchronized camera shuttering to discriminate against light emitted from the flash. Backlit and retroreflective lighting geometries take advantage of small apertures and directionality of the laser beam.

To simulate the photographic effects of an explosion or electrical arc, we recorded video of a Photogenic PL2500 1000W/s Flash operating at full power. The objective was to visualize the glass bulb and internal components before, during, and after the flash event. Video was recorded with a monochrome iX Cameras i-SPEED® 513 ultra high-speed video camera recording 10,000 frames per second and resolution of 1160 x 870 pixels. The camera exposure was 1 microsecond, the minimum setting for the camera. The camera was equipped with a Nikkor 180mm 1:2.8 lens, stopped down to ƒ/5.6.

The subject (Photogenic PL2500 1000W/s Flash) was placed 7 feet away from the camera, and a 40” wide white retroreflective screen was placed 4 feet behind the flash unit. The retroreflective screen material was Avery Dennison T-1100 Engineering Grade Beaded Retroreflective film, which is commonly used to make highway signs. The flash bulb was illuminated with an Oxford Lasers FireFLY 500W pulsed GaAlAs diode laser that emits at 808 nanometers. The laser generated 1 microsecond pulses and was synchronized with the camera to pulse at 10 kHz. The laser output was conveyed through a 6 feet long by 5mm diameter liquid light guide to a 50mm diameter output coupler containing a 25mm focal length Fresnel lens. The output coupler was placed adjacent to the left of the camera lens and aimed so the flash bulb’s shadow on the retroreflective screen was hidden from the camera’s field of view by the body of the flash unit.

The retroreflective screen reflected the incident laser light back to the output coupler with approximately 2 degrees of dispersion. The camera lens was close enough to the output coupler that it captured a significant fraction of the retroreflected light. To attenuate light from the flash while maximizing laser throughput, a 50mm Edmund Optics 67-916 bandpass filter with center wavelength of 810nm and 10nm bandwidth (full width at half maximum) was mounted to the lens with a 72mm to 52mm step-down filter ring adapter.

Laser: 3.5 inches to left side of lens 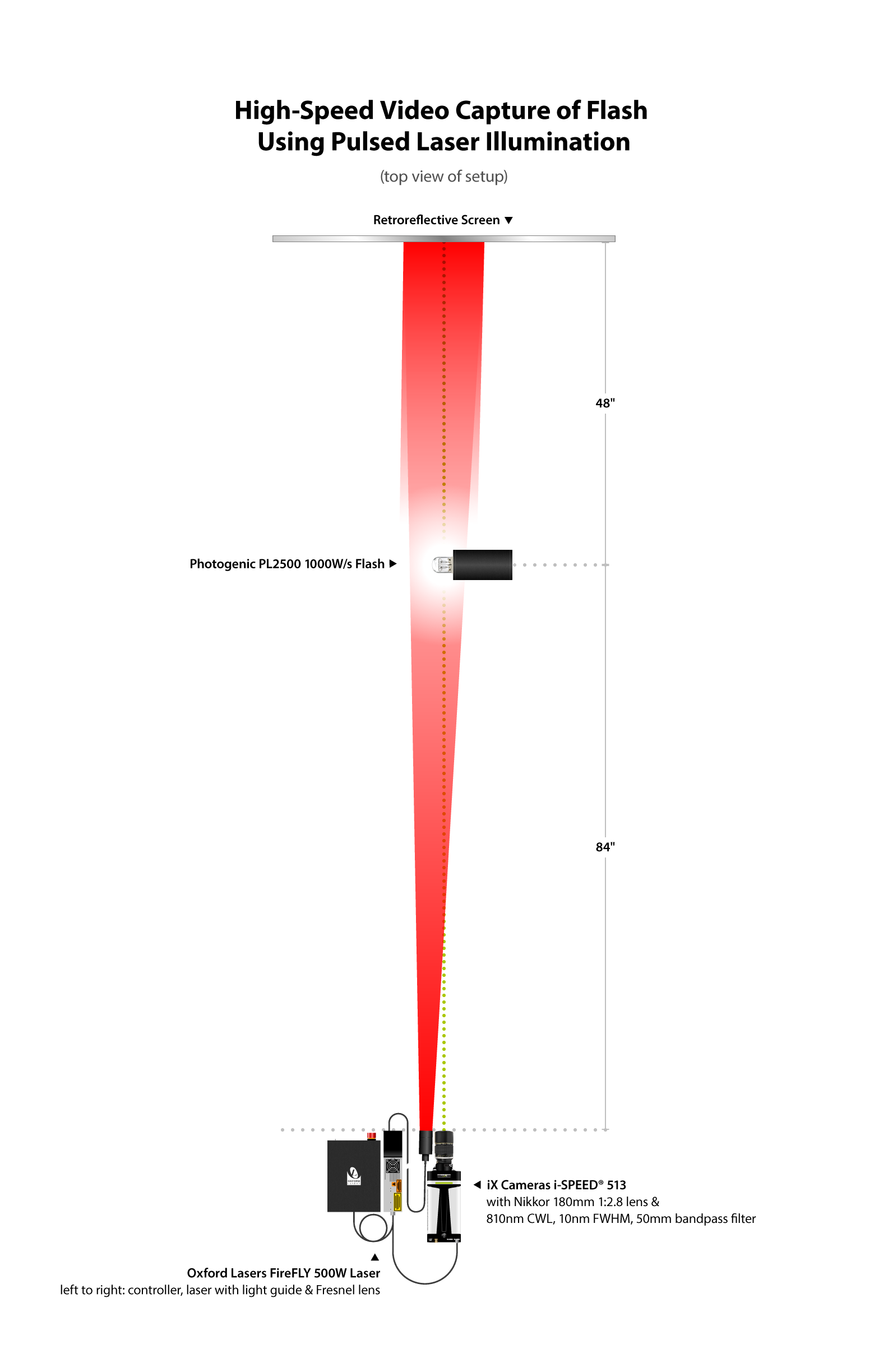 1. Flash Only: Flash is bright, overexposing video, making it impossible to see interior of glass bulb and visualize flash dynamics.

2. Flash with 810nm Bandpass Filter & Retroreflective Screen: 810nm bandpass filter suppresses flash during exposure, correctly exposing interior of glass bulb during the brightest period of the flash. However, frames before and after the event are underexposed and do not reveal detail.

3. Flash with 810nm Bandpass Filter & 808nm laser: Flash bulb illuminated by 808nm laser pulsing synchronously with the camera at pulse width equal to 1µs camera shutter speed. Specular reflection of laser on small areas of glass bulb and metallic parts – frames are underexposed and do not reveal sufficient detail when the flash is dim.

4. Flash with 810nm Bandpass Filter, 808nm laser & Retroreflective Screen: Retroreflective screen placed 4 feet behind the flash reflects laser beam back to its source (adjacent to the camera lens) during exposure. The resulting bright background makes it possible to expose silhouettes of the glass bulb and its interior, even when the flash is dim. 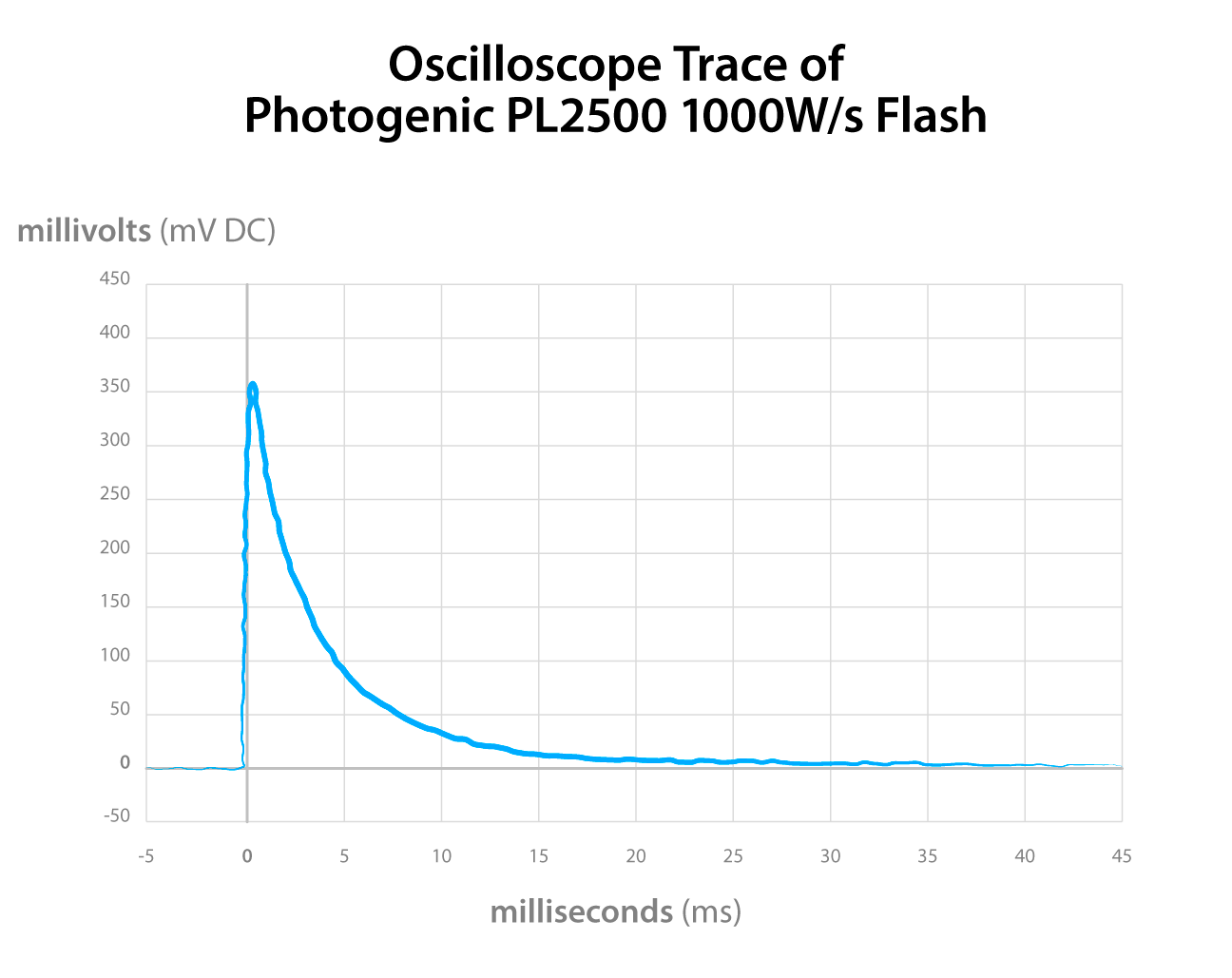 Oscillogram of flash intensity versus time. The flash intensity was measured by a ThorLabs DET36A2 biased S1 detector (rise time of 14ns with a 50 ohm load) and the signal was recorded by a PicoScope 3206D USB 3.0 oscilloscope with a bandwidth of 200 MHz. The intensity of the triggered flash reaches its maximum in less than 0.5ms, then decays, diminishing to 50% @ 2.1ms and 10% @ 9.1ms.

Contact a Hadland Imaging representative to learn more about laser illumination, ultra high-speed cameras & everything else you need to get the job done right.