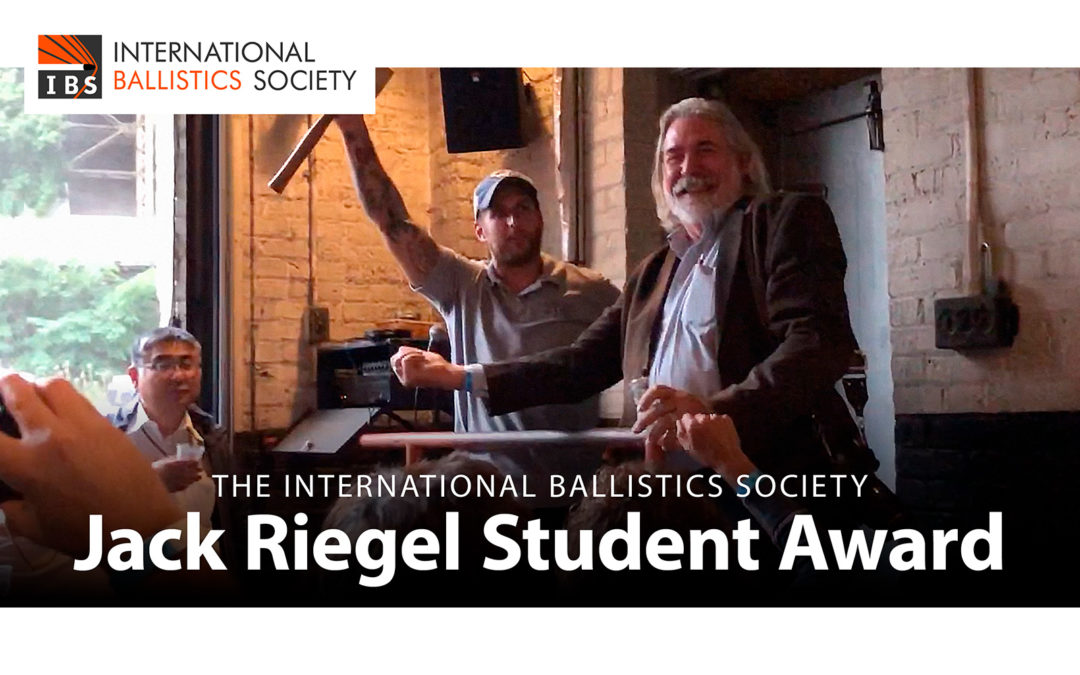 The award was renamed to the Jack Riegel Student Award honoring Jack’s vast and magnificent contributions to the ballistics community in general and the International Ballistics Society in particular, especially as its Founding President in 2010. 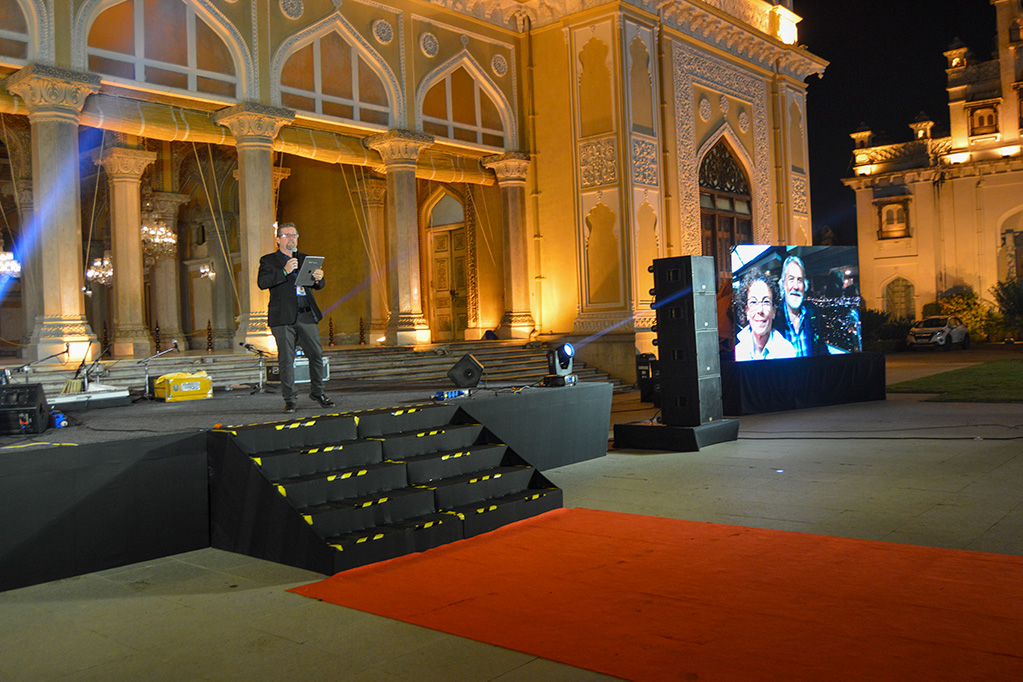 Good evening everyone – thank you Sidney (Chocron) and IBS community for the introduction and the privilege to speak with you on behalf of the Riegel family.

For those who may not know me, my name is Todd Rumbaugh and I am the President and CEO of Hadland Imaging. We specialize in high-speed and ultra high-speed, visible and IR photography, including X-ray and range instrumentation.

I first met Jack in the late 1990s when he worked at Southwest Research Institute. He used to tell people how excited and proud he was in purchasing and using one of Hadland’s early Imacon468 intensified cameras that recorded 100 million frames per second.

In 2006, Jack, Don Berry and I met up at the ARA conference and hung out every night at the bar till way past its closing… talking about life, ballistics, instrumentation, gas guns and the like. We had a blast. Jack was always fun to be around… never a dull moment, the conversation always stimulating and entertaining.

A few years later and several conferences past, I approached Jack and asked him if he would be interested in working part-time for Hadland. He told me he was retired and that he and his wife, Roxy, were moving from Virginia and building a house in Texas. I explained that we would be delighted if he were to join us when he could, and we would work him into the mix at Hadland.

Jack agreed that it was a perfect blend and match for us and joined Hadland in 2016.

About Jack
John P. Riegel III, better known as Jack, had a lifelong passion for the sciences, through which he made many personal and professional connections in a long career with defense technology and research firms. He was a natural leader and Ambassador and it’s no surprise he was the Founding President of the International Ballistics Society.

Jack held many titles over the years – from senior class president and captain of the football team in high school; scholarship recipient, educator and mentor during his college years; engineer, scientist, researcher and leader in his professional career.

Jack was a husband; a larger-than-life dad to his children and Santa Claus to his grandchildren. Jack was a shining example of a man devoted to his family, friends, community and making the world a little better through knowledge and personal commitment.

Jack’s wife, Roxy said, “He really enjoyed mentoring, teaching and getting involved with numerous organizations, always trying to make a difference in someone’s life and the community.”

Jack worked at Southwest Research Institute, where he spent 27 years. At the same time, he was an active member of multiple science-based organizations with an emphasis on ballistics, often holding leadership positions, including: The Founding President of the International Ballistics Society and chairman of the National Defense Industrial Association’s ballistics division.

In 1990, he acted as co-chairman to the International Symposium on Ballistics held in San Antonio Texas – one of the many annual conferences he attended around the globe. Jack’s travels led him to develop a wide assortment of friendships and professional relationships.

“He has friends and colleagues from all over the world,” Roxy said. “Everybody tells me he’s the smartest man they know.”

Following his extended time at Southwest Research, Jack moved to Washington DC to work for QinetiQ North America, and eventually, he went out on his own, starting a private consulting firm, R3 Technology, Inc. and in 2016 he went to work with Hadland Imaging.

Unfortunately, Jack passed away suddenly on September 8th, 2019 at the young age of 64. He had recently returned home after a surgery he had on August 25th. We last saw each other a few days earlier at the Aeroballistic Range Association (ARA) Conference in Milwaukee, Wisconsin. He was an incredible friend and colleague, devoted husband and father and he lived to help others. He is sadly missed everyday. A true ambassador to the Ballistics Community and life in general.

On behalf of his family and the community he loved and cherished, we are all honored that the student award has been renamed to recognize Jack’s many contributions to IBS. I know he is looking down upon us now and smiling. Thank you again for this opportunity to speak to you tonight and to International Ballistics Society and the 31st International Ballistics Symposium for all of their support. 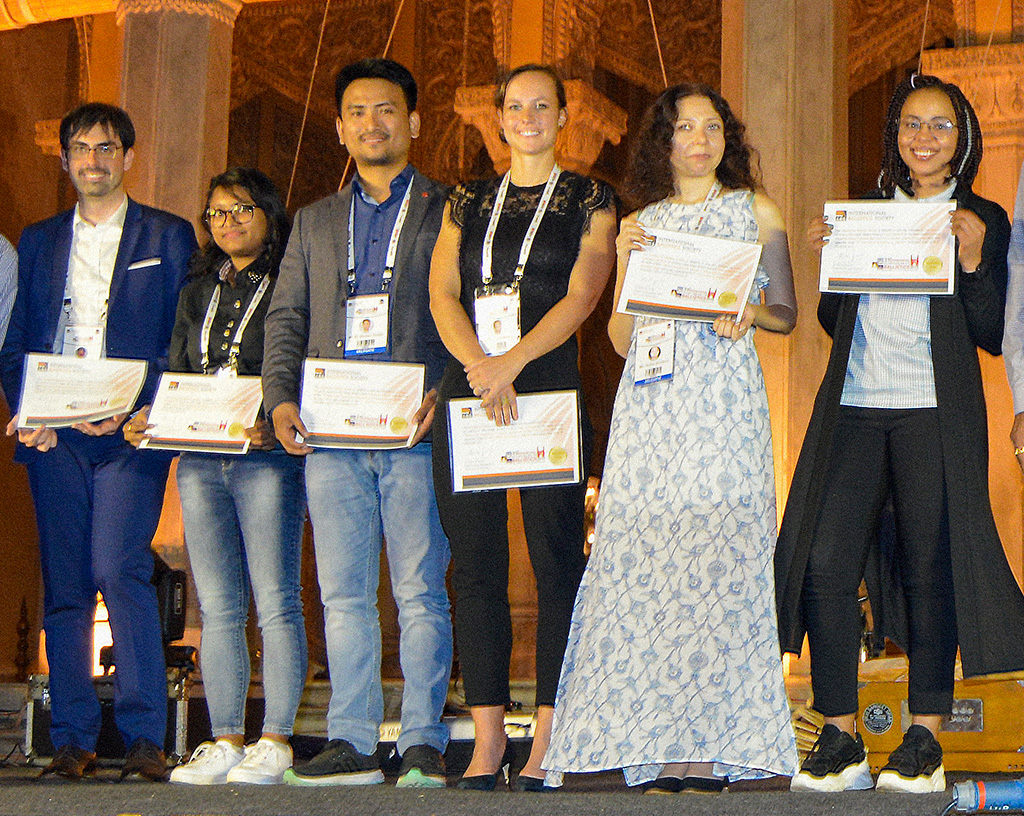 Award winners received conference registration and travel support to the 31st International Symposium on Ballistics, and a stipend.

Guillaume Arnoult graduated from the french engineering school ESTACA and is currently following PhD studies on the control of the trajectory of a spin-stabilized projectile. This study is funded by Nexter Munitions and Onera, the french Aerospace Lab. The main topics of this study concerns the numerical evaluation of aerodyanmic coefficients, surrogate modelling and flight mechanics.

Véronique de Briey is a military assistant in the department of weapons systems and ballistics of the Royal Military Academy in Brussels and is currently busy with a PhD in External Ballistics.

From 2016 till the present I have been studying for Nizhny Tagil Technological University (branch) Ural Federal University in position of post-graduate student of the Department of Special Engineering. Prize of the Governor of Sverdlovsk Region Laureate (2018). The Prize was given in 2018 for the work Development of methods for calculating the terminal ballistics of high-power ammunition using reaction materials. Kalashnikov Prize Laureate 2019.