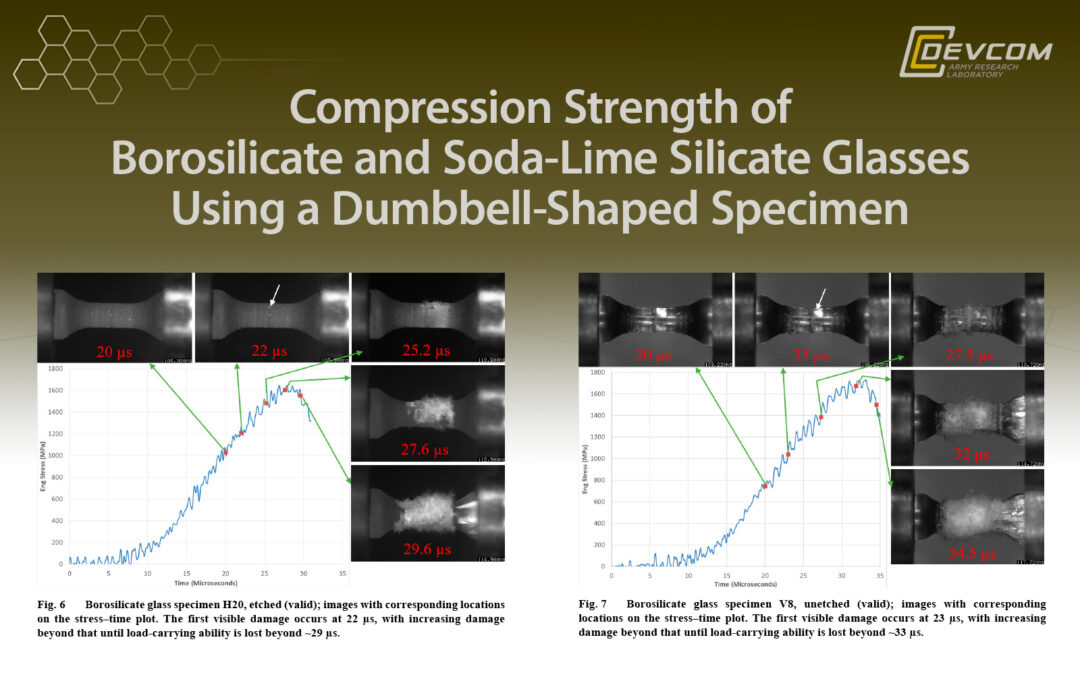 Abstract
The compression strength of a borosilicate and a soda-lime silicate glass is measured under quasi-static and dynamic strain rates with a dumbbell-shaped specimen. Two different specimen orientations were machined, parallel (vertical) and perpendicular (horizontal) to the plate thickness, and some specimens of each glass were etched prior to testing. A dumbbell specimen was used since the typical cuboid or cylindrical specimen develops a large stress concentration at the ends of the specimen, leading to premature failure and correspondingly low strength values. The dumbbell-shaped specimen allows one to differentiate between “valid” and “invalid” failure for each experiment by observing, with a high-speed camera, where fracture initiates—within the specimen gage section (valid) or from the specimen ends (invalid). However, damage can initiate in both the ends and the gage section (nearly) simultaneously, clouding the determination. Time correlating the force/stress measurement to the observed images has some uncertainty that can add additional ambiguity. The success rates for each glass were completely opposite: relatively high for borosilicate and very low for the soda-lime silicate. However, there is no obvious explanation. Despite these issues, it is believed that the dumbbell-shaped specimen is the best geometry for measuring the compression strength of brittle materials.

Introduction
Glass is a critical strike-face component of many transparent armor systems. The glass typically used in these systems is produced by the float process, where a glass sheet is made by floating molten glass on a bed of molten tin. This process yields large and inexpensive glass sheets having a uniform thickness and very flat surfaces. Much of this glass is used commercially as architectural and optical windows, and the glass in commercial displays and mirrors are made by this process. Chemical and/or thermal treatments can be applied to make the glass stronger and more scratch-resistant for use in automobile windshields, as well as in computer, television, and phone screens. Soda-lime silicate is the most prevalent glass used in the world. It is relatively cheap and can be manufactured and processed at lower temperatures. It is composed mainly of silicon dioxide, sodium oxide, and calcium oxide. Soda-lime silicate is the glass most commonly used for window panes and drinking glasses as well as bottles and jars used for food storage. Borosilicate glass consists mainly of silicon dioxide, boric oxide, sodium oxide, and aluminum oxide. It has a very low coefficient of thermal expansion, resulting in lower susceptibility to thermal shock. Additionally, it is also less dense and more abrasion- and chemical-resistant than soda-lime silicate, but the increased manufacturing and processing temperatures required increase the cost. Borosilicate glass is the preferred glass for laboratory glassware, medical vials, and syringes as well as many common pieces of household bake and cookware.

Contact a Hadland Imaging representative to learn more and visit our page on DIC Solutions (digital image correlation) for more information about testing machines, high-speed cameras & everything you need to get the job done right.