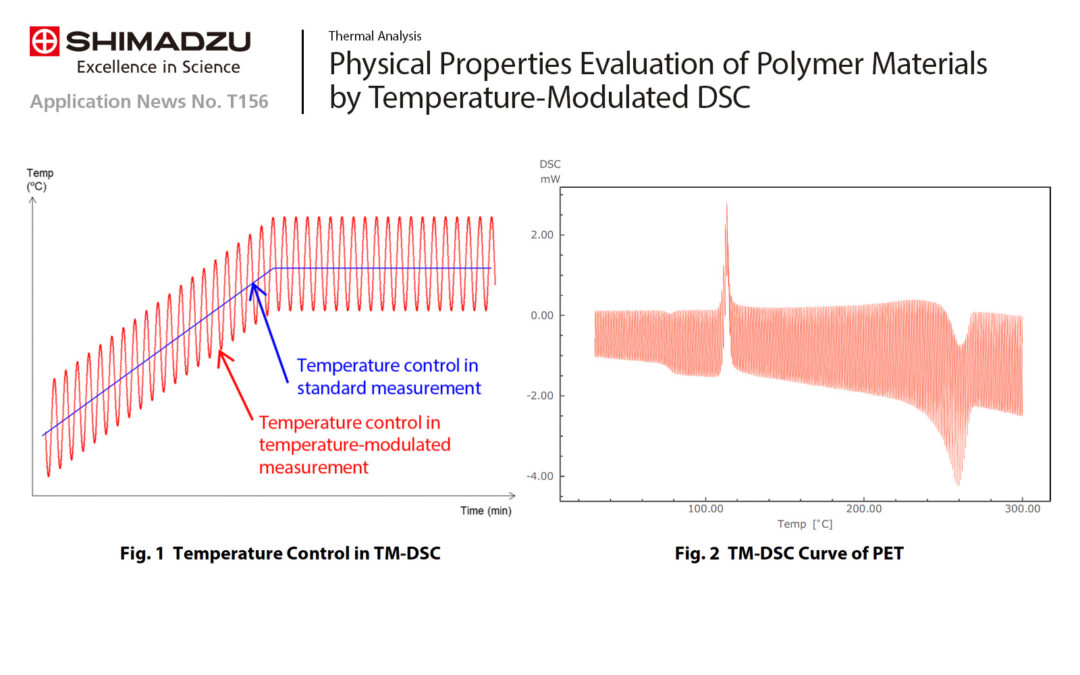 Introduction
Differential scanning calorimetry (DSC) is frequently used to evaluate the physical properties of polymer materials, such as the glass transition point, melting point, and thermal decomposition temperature. However, in standard DSC measurements, the peaks and shifts may overlap if multiple thermal phenomena occur in the same temperature range, and analysis of the individual phenomena may be difficult in some cases.

Temperature-modulated DSC (TM-DSC) is a technique that makes it possible to acquire information that cannot be obtained with standard DSC by temperature control in which a modulation is overlaid on a constant temperature increase. In this article, the thermal characteristics of representative polymer materials were evaluated by using the temperature modulation function of the Shimadzu DSC-60 Plus.

Separation of Heat Flows of Polyethylene Terephthalate
In TM-DSC, temperature control is conducted by overlaying a small-amplitude modulation over a constant temperature increase, as shown in Fig. 1, and as a result, data like those shown in Fig. 2 can be obtained. Data processing of these results using the temperature-modulated DSC analysis program of LabSolutions™ TA makes it possible to obtain the reversing heat flow, which corresponds to changes in specific heat, and the non-reversing heat flow, corresponding to heat absorption and generation, in addition to the total heat flow obtained with the standard DSC. As a typical example in which changes in specific heat and heat absorption and generation occur in the same temperature range, Fig. 3 shows the results of an analysis of a TM-DSC measurement of polyethylene terephthalate (PET). In this measurement, the heating rate was 2 °C/min, the modulation cycle was 40 s, and the modulation amplitude was 0.2 °C.

In the total heat flow (corresponding to the standard DSC curve), the glass transition and enthalpy relaxation overlap at around 75 °C. In the TM-DSC measurements, the baseline shift due to the glass transition appears in the reversing heat flow, while the endothermic peak due to enthalpy relaxation appears in the non-reversing heat flow. Thus, these two phenomena can be separated by the temperature modulation technique.

Contact a Hadland Imaging representative to learn more about DSC Solutions (differential scanning calorimetry) and for more information about testing machines, high-speed cameras & everything you need to get the job done right.