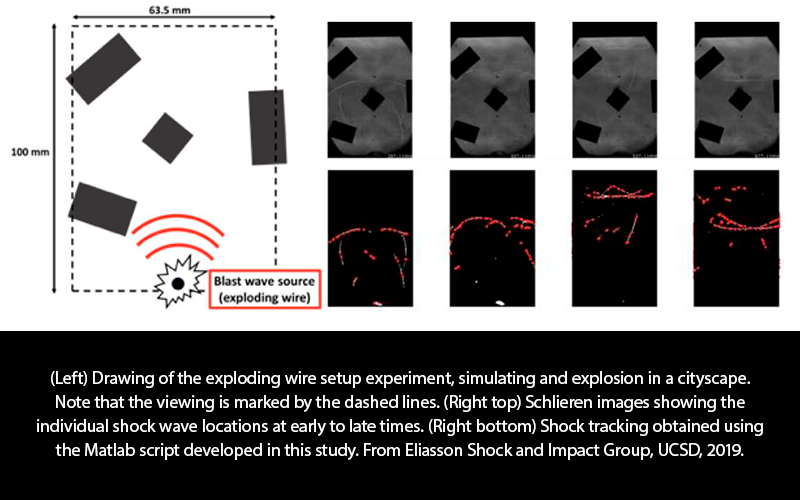 ABSTRACT
Blast wave interaction with structures is a complex phenomenon. Not only are the fluid mechanics and combustion physics involved in the blast wave dynamics difficult to correctly model, but also the interaction with a structure, the structure’s response to the dynamic loading, and the structure’s influence on the blast wave propagation itself. Clearly, blast waves propagating on nearby structures fall under the category of three-dimensional scenarios featuring highly time dependent fluid and solid mechanics responses. In addition, the high strain rates imparted onto the structure make it difficult to extrapolate a low strain rate response of the structure. Here we present a novel small-scale experimental setup to study blast wave-structure interaction in a three-dimensional setting in which a cityscape is subjected to a dynamic blast wave event. The experimental turn-around time is very fast: less than two minutes per experiments. Experimental data is obtained via ultra-high-speed schlieren photography and local strain gages attached to the structure(s) of interest.

INTRODUCTION
Excellent presentations of the basics of compressible flows and blast waves are presented in detail in the books by J.D Anderson (2003) and C. Needham (2010). Here, only a short review will be given. Shock waves are formed when objects move faster than the speed of sound or when energy is suddenly deposited into a restricted volume. The source of energy can be mechanical, chemical, nuclear or through electromagnetic radiation. A shock wave is a thin discontinuity in which flow properties change abruptly from one state ahead of the shock wave to another state behind the shock wave. The thickness of a shock wave is on the order of a few mean free paths of the fluid, which is about 200 nm at standard atmospheric conditions. Shock waves may form in both gases or condensed matter. The mathematical expressions describing shock waves are nonlinear by nature, so acoustic theories where superposition is used are not applicable for shock waves.