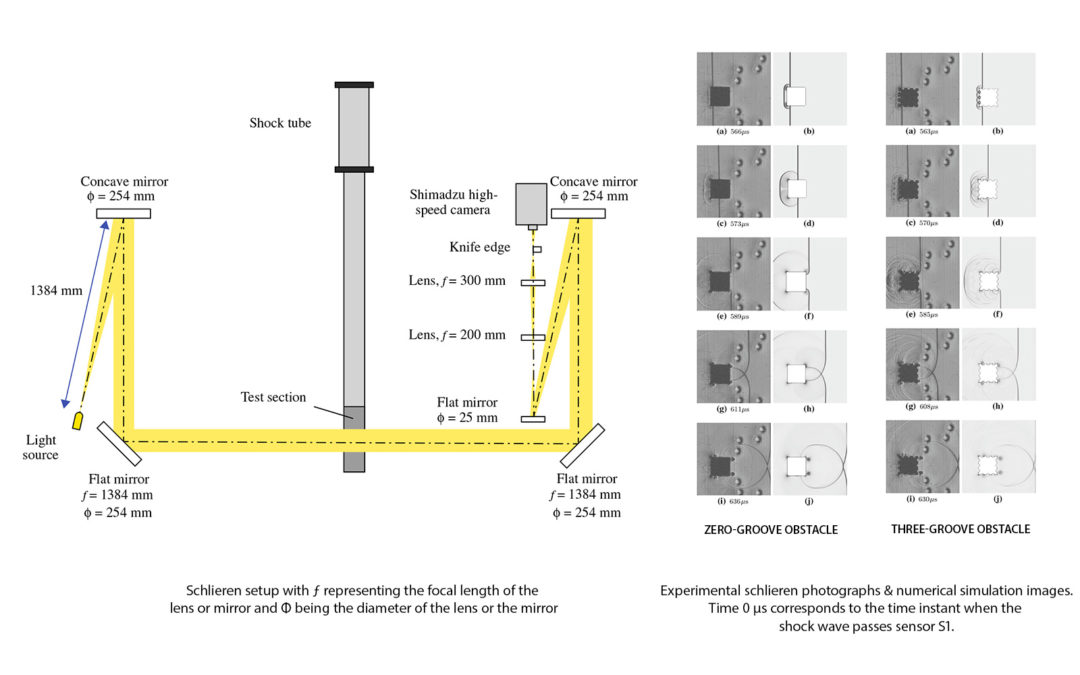 ABSTRACT
Explosions and their resulting shock waves may pose a large threat to both humans and structures alike. The previous research concludes that a logarithmic spiral configuration is effective in focusing shock waves to a focal point. This research outlines shock tube experiments conducted on two types of solid rectangular obstacles placed in a logarithmic spiral shape. The obstacles have a square cross-sectional area, with one set of obstacles being normal square shapes, but the other set of obstacles have three grooves cut out on every side of the obstacle, thus reducing the cross-section area by 10%. High-speed schlieren photography is used to visualize the shock waves and numerical simulations provide supporting data. A comparison in regards to shock wave attenuation between the two obstacle sets is presented. Results conclude that the three-groove obstacle geometry was successful in attenuating the peak pressure and pressure impulse of a reflected shock wave; however, the results for the transmitted shock wave between the two configurations are again inconclusive.

INTRODUCTION
Attenuation of shock waves is of importance for many practical applications, such as blast wave propagation through tunnels, unintentional industrial accidents, and high-speed aerospace structural mechanics. For example, by dampening the harmful effects that result from a shock wave, one might be able to reduce the number of possible injuries or fatalities in any given event. Different types of mitigation techniques using liquids or solid structures have been researched by numerous research groups (Shi and Yamamura 2004; Britan  et al. 2006; Seeraj and Skews 2009) with more methods covered in greater detail in the review paper by Igra et al. (2013).

In some scenarios, solid obstacles may provide a cost effective and easy-to-implement attenuation solution. Solid obstacles allow for passive protection of people and structures without the need for expensive integrated technology. These solid obstacles can either amplify or attenuate the shock wave effects depending on their configuration and the direction of the shock wave.

This study was supported by the National Science Foundation (NSF) under grant No. CBET-1437412.