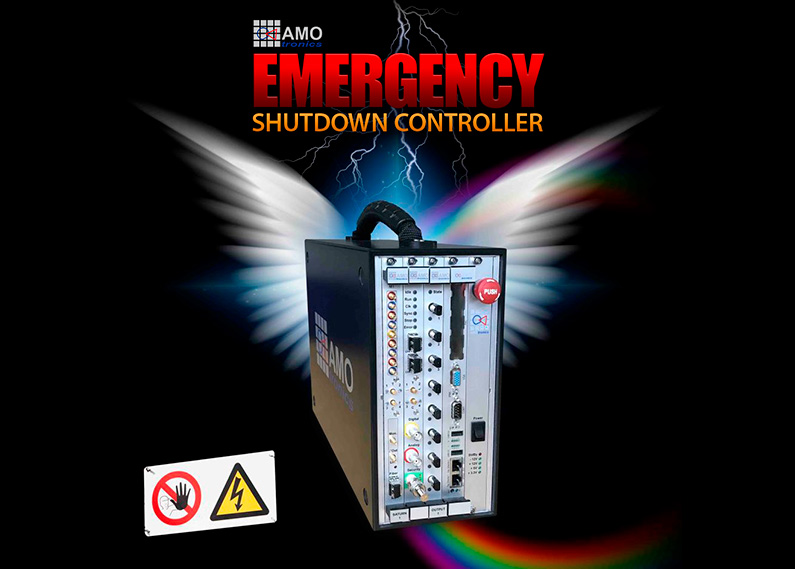 The AMOtronics Emergency Shutdown Controller is the first active monitoring system specifically designed for high-voltage and high-current test labs – it monitors in real time and reacts immediately in the event of a fault.

Aachen – High voltage and high current tests of power components for power generation or transmission have an increased risk of accidents. The new Emergency Shutdown Controller from AMOtronics is the first industrial solution to offer active protection for the valuable laboratory equipment. At fairly low cost, major damage of high-value components such as power generators or capacitor banks and resulting long and expensive lab down time can be prevented.

The controller monitors in real time laboratory tests with DC or AC at any voltage and power level. Within 1 μs, it initiates immediate emergency shutdown in the event of a fault via its optical output signals and can trigger further protective measures, including complex safety sequences such as controlled grounding, audible and visual warning signals, etc.

Intelligent test monitoring in all phases
During the different switching cycles of a power test, the emergency shutdown controller monitors, for example, single-phase or three-phase current and voltage levels at up to eight inputs. The system automatically recognizes the beginning of the test, then continuously monitors and records the test progress and reacts in the event of a fault. Disconnect faults in switch tests are detected as well as overcurrent faults. The correct completion of the active test phase is also checked. The planned test duration can be set as a time value or via the number of sine half-waves. The system also remains active during the pause phases, continuously monitoring voltages and currents for compliance with permissible levels. For typical circuit breaker tests, AMOtronics provides predefined configuration screens.

Thanks to its high flexibility, the Emergency Shutdown Controller perfectly supports testing of prototypes in product development. At the same time, the usage is simple and standardized. Even series of tests in type, part and commissioning tests in industrial production can be performed economically.

For the transmission of the output signals, AMOtronics utilizes – as in the case of data transmission of the in-house SATURN measuring systems – on isolating optical fiber transmission. This guarantees robust resistance to electromagnetic interference typical for circuit breaker tests. In addition, digital signal filters reduce short-term interference pulses during monitoring, which prevents accidental false shutdown. Large distances between control room and test cells can be overcome without difficulty and without a relevant time delay. On request, AMOtronics offers fast IGBT semiconductor switches for the direct control of circuit breakers.

The AMOtronics Emergency Shutdown Controller complies with the test requirements for digital data processing according to DIN EN 61083 for measuring instruments and software for measurements in high-voltage and high-current tests. It fits seamlessly into any existing lab environment as a stand-alone device. AMOtronics also integrates the system into its own SATURN measuring systems. This way you can directly use the measurement signals of a SATURN Transient Recorder or access the output of the SATURN Sequencer / Timer Controller. Thanks to their modular design, existing measurement and control systems from AMOtronics can be extended at any time.

Contact our sales team at Hadland Imaging for more information or to order your AMOtronics Emergency Shutdown Controller.

About AMOtronics
AMOtronics develops and manufactures modular high-speed measurement systems which set the standards in precision, synchronization and safety. The hard- and software solutions of the SATURN series are mainly used in highly demanding environments in industry and research. Common applications are component testing at any voltage level for AC grid and DC lines (HVDC), vibration and impact-testing for material science, in aerospace applications or vehicle engineering.

AMOtronics proudly employs its own interdisciplinary team of engineers and computer scientists to give the company a high degree of its own development services – from ideas to prototype, design and construction through to manufactured products. The company was founded in 2010 by Jürgen Martini, Martin Hessing and Stefan Verse. Since the mid-1990s the shareholders work together on joint research projects focused on innovative measurement technology. Their long standing experience is the valuable basis for the success of AMOtronics.

Global clients include well known industrial companies such as the ABB Group, General Electric, Schneider or Siemens as well as private and public research institutions – on the nearby RWTH Aachen University and at many other universities in Germany, China, South Korea, Taiwan and the United States. In addition several calibration laboratories for measurement technology, such as KERI, as well as the German Aerospace Center (DLR) and the Physikalisch-Technische Bundesanstalt in Braunschweig (PTB) rely on AMOtronics measurement systems.

In addition to regular participation in relevant trade fairs and conferences such as CIGRE, AMOtronics is also involved in several research cooperation activities with universities, industry and research institutes.